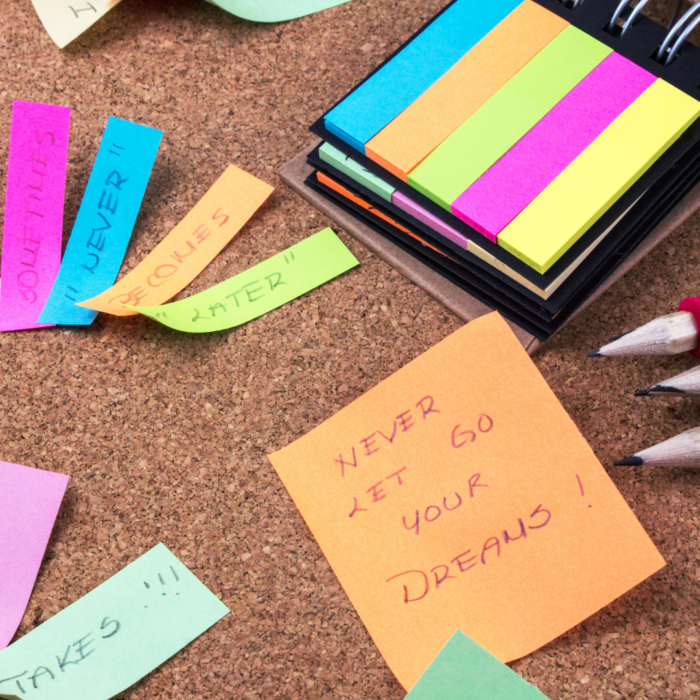 Hi, my name is Kelly Boule, and I am a health and wellness coach here in the Kansas City area. I have been practicing for almost 23 years, and I specialize in Hypnotherapy and helping people change their diets. And today I want to talk to you about breaking habits and making habits and sticky notes, which is kind of a funny topic.

You guys all know Post-it notes, sticky notes. I’m sure a lot of you use them a lot if you’re like. My husband, he’s got sticky notes everywhere on the kitchen counter to remind them to do stuff. Anyway, I digress. Today I want to talk to you about habits, and I want to start off by telling you a story that, it’s about me, and it goes back to about 30 years ago. So I am from a small town, it’s called Iowa, Kansas, and it’s in southeast Kansas. And if anybody have been to Iola, Kansas, if you’re one of my friends watching, you know what I’m talking about.

We’ve got a handful of restaurants, literally four or five, few gas stations, and you can literally get from one side of town to another. So 30 years ago, I was home from college, and I had been seeing a guy. We’ve been seeing each other for a couple of years, so we’re going back to 20-21 years old, right back home for the summer. And what happened is we decided to part ways beginning in the summer. And so that was kind of a bummer, but it was an amicable thing.

But if you’ve grown up in a small town and you have broken up with your significant other, you know what that is like. Especially this is before cell phones, this is before any of that. And so when you’re 20 or 21, you cruise around with your friends, you drive around when you’re not working. You go to the one of four restaurants there, you go to the swimming pool. And so anyway, it was really hard.

It was really terrifying for me to think about going that whole summer and having to see each other. You drive by each other, you run into eachother at the gas station. And that was really scary for me because I didn’t want to spend the whole summer having to deal with all that. And I knew that I had to break that habit. You know what I’m talking about? We hang out with people and sometimes they become our habit to talk to them, to call them, to go to certain places together.

So I knew I had to break that back before I even heard about hypnotherapy, understood it. And so I wrote this sticky note to myself, May of I don’t remember, 1993, something like that. Yeah, 93. This note was basically ten things that I was going to start doing because I knew I had to let go of that part of my life, and I had to immerse myself and distract myself and get focused on something else. So I had this list of, like, ten things. It was stuff like drink more water, eat healthier, go to the gym, call a friend, meet some new friends. And number ten, I’ll never forget it. I wrote, get a life.

You got to sometimes splash cold water on yourself when you’re 20 or 21 and breaking up with somebody. So I did this and I studied that. I had to completely concentrate on this sticky note every day, sometimes five times a day. I had to remind myself of like, what am I going to do? Instead of be distracted and worry or be sad.

And I’m happy to report that that sticky note saved my, it seemed like it saved my life that summer. Not only did it work, but I actually had a really good summer. So, like one of the best summers of my life. Looking back and remembering all that. I even met some new friends who moved into town, and she’s still a really good friend of mine.

Anyway, that was 30 years ago, and I learned that sticky notes can work. And sometimes to break a habit and to create new habits, you got to sit there and stare at it and look at it and read it several times a day to remind yourself of what you’re not going to do and what you’re going to do instead.

So fast forward quite a few years later. I graduated from Emporia State, got a degree in psychology, went on to get my master’s degree in counseling, moved up to Kansas City and been working up here. And a couple of years of being up here and working, I kind of came to this point where I knew I needed to again, up my habits, change my habits, create better habits. I was probably staying up too late and eating a lot of, I was a bartender for a while at Tanner’s Bar and Grill. This is back in the ’90s when Tanners was like a thing, and so I ate a lot of chicken lips and nachos and all that stuff, smoked cigarettes. And it was around that time I stumbled upon hypnotherapy, and I will save that story for another video because it’s a really good story. Anyway, I knew I needed to make some changes.

I was looking at, I didn’t know I was going to start business yet, but I knew I was looking to do something more than just traditional counseling and bartending. So I went in to see this hypnotherapist, and we talked about some things, and he made some great suggestions about not staying up so late and maybe working on that diet, maybe going to the gym and just doing some really healthy things as I was trying to make these really much bigger life decisions. And I did try that sticky note thing again, and it kind of worked, but it just seemed really hard. I was just in these habits, right? I’m staying out late with my friends, eating some late-night tanners and Taco Bell and just whatever. I guess being 26, 27 at that time. Anyway, I had some sessions with hypnotherapy, and it was really surprising to me. A month into it, I was thinking about hiking. I started thinking about eating healthier. I joined a gym.

And what’s funny about this is none of these at that time were major goals. I just knew I needed to change my habits. And what was more interesting is I felt like doing these things. I actually felt like going to bed earlier and getting up earlier. And I was doing things like before Whole Foods became really big. It was Wild Oats. Some of you remember Wild Oats. And I would go there once a week and I would get this fresh carrot, celery juice, because it just sounded good to me.

So over the course of a few months, it really made a lot of changes. And of course, being healthier and feeling better about myself started leading to me considering the possibilities of starting my own business. I still didn’t know it was going to be hypnotherapy at the time, but something in the health and wellness coach and counseling and stuff like that. And it occurred to me actually, it did not occur to me at the time, but it occurred to me about six months after I had made all these changes that it’s like, oh, that’s what hypnosis is. That’s what hypnotherapy is.

A Sticky Note for the Brain

It’s like a sticky note that goes in your brain. I didn’t have to write stuff out and look at things five times a day. Even though that works, that can work. But I noticed with hypnotherapy, I still had to set goals. I still had to want the things that I wanted. But the hypnotherapy helped to make that feel easier. It’s like it’s stuck there in the brain.

So anyway, I wanted to share that with you. That hypnotherapy in that way is really great at helping people to break habits and to create new habits. And that’s really the best way I can describe it, and I describe it a lot now. Like a sticky note in your brain.

Book an Appointment with Me

So anyway, thanks so much for listening. If you have any questions, just put it in the comments below. And if you’d like to contact me, you can contact me. Feel free to text me. That’s probably the fastest way to get a hold of me. Kelly Boule, Hypnotherapy, health and wellness coach here in Kansas City. Thanks for listening and have a great day. Bye.